I did it!!!  With the help of my friends, I finished the Chicago Marathon.  We had such a great time!  The race turned out to have perfect weather - 40-50 degrees.  I struggled though.  My legs started hurting in the very beginning.  My right calf/achilles was hurting.  I was just running along with my friends and trying to put it out of my mind.  Part of the problem is my shoes are worn out.  Part of the soles have lost their treads.  Completely my fault for not getting a new pair a month ago or so.  My feet started hurting around mile 6 and my legs started aching around mile 8.  Yikes.  I was in for a long race.  I didn't say anything and just tried to keep positive thoughts in my head.


My friend Holly paced us.  We all had our our UT head bands she bought us.  It was awesome having her because she is much faster and had done this a few times and pulled us through those last tough miles.  There was a group of 5 of us running and Holly and I got separated for a few miles from the others, but miraculously we found them after seeing them about 40 yards ahead of us on a jumbo tron set up around mile 18.  I took cliff shot blocks and gu, tried to take gatorade and water at most aid stations.  Chicago does an amazing job of having the aid stations set up ever 1-2 miles it seems.  My legs were aching every step from 14 miles+.  My garmin was all over the place, between running under overpasses and between skyscrapers, it wasn't that accurate except for keeping up with running time.  The final miles it shows was 26.57 which may be accurate with all the weaving and turns.  I just don't know.  It says my average pace was 9:33 but actually it was 9:50 officially from the race.  But the total time was the same... 4:13!  The cool part to me was we crossed the 1/2 way point at 2:05 and finished with very close to the same pace.  The only walking we did was a few steps when taking our gatorade or water.  This was such a mental thing for me.  after getting to 15, I was shooting for mile 18, then mile 20.  Then just every mile after that.  I said, just keep moving, just keep moving. Debbie and I were dying those last few miles, but Holly kept cheering us on.  I could have lost my emotions a few times those last 6 miles, but I sucked it up.  When I stopped running after crossing the finish line, my legs hurt soooooo bad but luckily one of holly's friends handed me an advil and that helped lots.  I hung out a few minutes with my friends and headed back to the hotel to get a shower and then drove 7 hours home with my mom.  I drove.  I'm a bit sore today, a lot sore, but I'll survive.  I will never forget this.  My friend Holly talked me into it, and I'm so grateful.  Just to know I could do it, that I could push through the pain.  I'm not sure if I hit the wall around mile 17, but whatever it was it was tough.  I never stopped.  I couldn't have done it without Holly and Debbie there, it was such a great experience.  And I have a medal to prove it wasn't all just a dream. :) 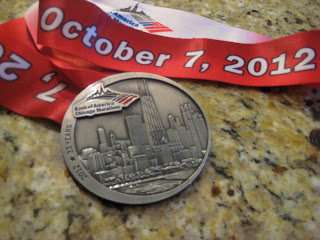 I also raised over $300 for Compassion International!  Thanks to all my friends and family who donated!!
Posted by Kassie at 9:49 AM No comments: 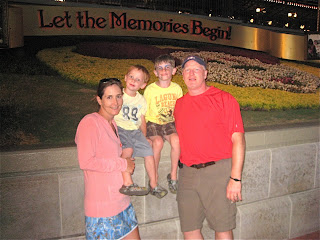